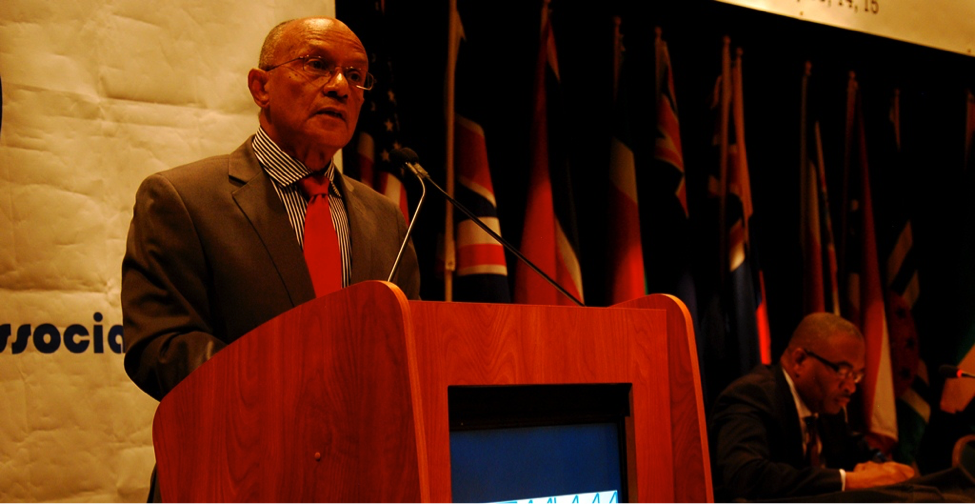 NIA is (as at March 15, 2015) the Jamaican Chapter of Transparency International (TI) the global leader in the fight against corruption. The accreditation agreement was signed in Kingston, Jamaica by the Chair of the TI Board of Directors himself, Jose Ugaz, and the Executive Director of NIA, Professor Trevor Munroe. The signing signaled the official joining of the more than 100 national chapters worldwide fighting the world’s fight against corruption. NIA continues to work assiduously to strengthen its ties with and from new strategic alliances with like- minded bodies internationally.

NIA through its Executive Director and other members of staff have benefitted from alliances forged with international partners. One such example is the close working relationship enjoyed by NIA and TI. NIA hosted what from all accounts a successful on all fronts TI Regional (Americas) was meeting in June 2012. This honour for a relatively new organization such as NIA was evidence in part of the high regard with which NIA was held within the movement. Since November 2012 NIA has attended at participated in TI’s Annual Membership Meeting (AAM) held in Brazil, Colombia, Germany and Panama through its Executive Director who is one of only thirty one of only thirty – one (31) of TI Individual Members. NIA has benefitted from and continues to benefit from the expert advice and counsel of TI who is also very much interested in learning from the NIA-Jamaica experience. This mutually benefitting relationship NIA intends on strengthening in the years ahead.

Requests for presentations from NIA have been received from several bodies regionally and internationally these are a few:

Professor Munroe delivered a keynote lecture entitled “Political Corruption in the Caribbean – Where to from Here?” to the audience of the University College of the Cayman Islands, Distinguished Lecture Series, on November 29, 2012 in Georgetown, Cayman Islands.

The presentation outlined the corruption – perceptions and realities – on a global as well as regional level. The cost of corruption, both monetarily and in the weakening of democratic institutions was explored, along with the attendant consequences if the current trend is not arrested and reversed. Professor Munroe spoke of the legislative and other changes which need to be implemented to address the problem. This visit formed the foundation for future collaboration.

Excerpts of the presentation were reprinted in the Sunday Gleaner of December 30, 2012 http://jamaica-gleaner.com/gleaner/20121230/cleisure/cleisure3.html

Professor Trevor Munroe, Executive Director of National Integrity Action was one of a number of international presenters invited to address an Anti-Corruption Conference held at the Hyatt Regency in Port of Spain, Trinidad. Professor Munroe spoke to matter of “Regulating Political Party Funding,” a shared area of concern for Jamaica and the twin-island Republic. Other topics addressed at the conference included:

The one-day conference hosted by Trinidad and Tobago Transparency Institute (TTTI) was held on Friday, March 8, 2013, under the theme: “Regulating Against Opportunities for Corruption” and came against the background of Trinidad and Tobago’s score of 39 (out of 100) in the 2012 Corruption Perceptions Index.

The Executive Director of National Integrity Action was invited by Grantley Stephenson, President of the Caribbean Shipping Association to address their 12th Caribbean Shipping Executives’ Conference, May 13-15, 2013 in Freeport, Bahamas. The conference was themed “Improving Productivity.” Professor Munroe will spoke to the topic of “International Trade and Corruption.” Hon. Perry G. Christie, Prime Minister of the Commonwealth of the Bahamas will also participate in the conference.

The Caribbean Shipping Association (CSA) has been in the forefront of the development of the Regional shipping industry and has been a partner to all the countries of the Region as they develop their local industries. The CSA continues to bring new ideas, thoughts and initiatives to the process of development and, in this regard, try to keep members up-to-date on current issues. The Gleaner reported on the conference http://jamaica-gleaner.com/gleaner/20130521/shipping/shipping1.html

The University College of the Cayman Islands (UCCI) hosted the 2014 Caribbean Conference, under the theme “Towards a Corruption-Free Caribbean: Ethics, Values, Trust and Morality” on March 19-21, 2014. For this 2014 conference, UCCI collaborated with Canada’s Carleton University’s Centre for Values and Ethics (COVE); the Department of Government of the University of the West Indies (UWI), Mona, Jamaica; and National Integrity Action (NIA). Some 120 participants from across the Caribbean, as well as North America, Europe and Africa were in attendance.

The aim of the conference was “…to reflect on various aspects of values and ethics, as they relate not only to the function of Caribbean governments and political parties, but also to the role of every institution – whether educational, religious, or social across the region.” The discussions held over the three day period covered a broad spectrum of issues, all with ethics at their core – simultaneously advocating for governments to take legislative and regulatory steps to reduce corruption, while informing and engaging the citizens of the deleterious effect of corruption and the concomitant gains from its reduction. 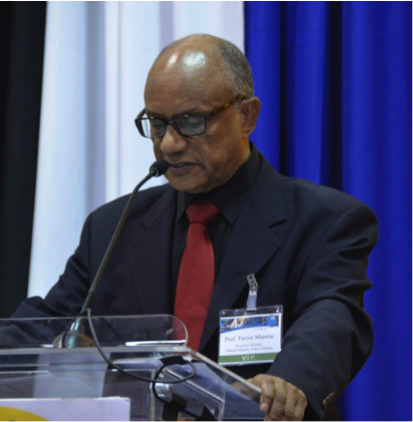 The Chair of the Board of Transparency International, the leading non-governmental organization involved in the global combat of corruption, Dr. Huguette Labelle opened the conference, delivering the keynote address. Dr. Labelle’s attendance and participation was facilitated and encouraged by NIA’s representation to her office. This opening session was chaired by NIA’s Executive Director, Professor Trevor Munroe. Prof. Munroe also addressed the plenary session entitled “Establishing and Governing Anti-Corruption Organizations Regionally.” In addition, he chaired the closing ceremony of the conference and was instrumental in drafting the conference declaration.

The conference achieved attendance and participation by a wide range of persons including regional heads of states, ministers of government, directors of anti-corruption agencies, private sector representatives and members of academia. Among these were:

(See photographs of his visit here)