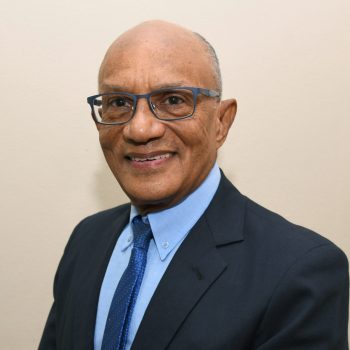 Professor Trevor Munroe, one of the Caribbean’s leading public scholars, has been Executive Director of Jamaica’s National Integrity Action, a not for profit NGO dedicated to the building of integrity and the combat of corruption in Jamaica on a non-partisan basis. Prior to this he directed the National Integrity Action Forum, a coalition of leaders of public sector anti-corruption agencies; a 2-year project launched in 2009 and supported by USAID. In 2012, Professor Munroe was appointed an individual member of Transparency International, the only such person from the Caribbean, one among 30 in the world.

As a scholar, he was promoted to Professor of Government and Politics at the UWI in 1998 and appointed founding Director of the Centre for Leadership and Governance in 2006. He had previously served as Head of the Mona Campus’ Department of Government.

Professor Munroe is the author or co-author of eight (8) books, primarily on issues of Caribbean democratic governance. His 1972 book on Jamaican politics remains the authoritative work on Jamaica’s transition to Independence. He has written extensively on issues of corruption and governance, including authoring Transparency International’s National Integrity System country studies of Jamaica, the Caribbean and, most recently, the Turks and Caicos Islands.

Professor Munroe, a Jamaican Rhodes Scholar, who attained his doctorate at Oxford University, after a 1st class honours degree at UWI, has received many academic awards, including the UWI Vice Chancellor’s Award for Excellence, The Mona Campus Principal’s Award for Research, the Honorary Doctorate in Social Sciences from Florida International University – the first from the English-speaking Caribbean – and has taken up Fulbright Fellowships at Harvard University in the United States. At the secondary level, he was educated at St George’s College where he excelled in academics, debating and track athletics.

Professor Munroe served as a Senator in the Jamaican Parliament between 1998 and 2007, championing integrity building measures and playing an active role on Parliamentary Committees dealing with corruption prevention. For many years, he served on the Executive of Jamaica’s private sector-led Think Tank and as a Director of the Jamaica Confederation of Trade Unions, having himself co-founded the UAWU, one of Jamaica’s major trade unions. Dr. Munroe has special expertise in building labour-management partnerships, having played a lead role in forging the accord between the trade unions and the trans-national corporations in the Bauxite Alumina sector in the late 1990s and led the team responsible for building trust amongst sector participants in the Partnership for Transformation chaired in 2011 by Jamaica’s Prime Minister.

Professor Munroe has served as Consultant to the World Bank, the Organization of American States, the Carter Centre, the United Nations Development Programme, Transparency International, USAID, and the UK’s Department for International Development (DFID) amongst other international, regional and national organizations. He is currently a member of the Advisory Group on Global Political Finance established by the International Foundation of Electoral Systems. He was a founding director of Citizens Action for Fair and Free Elections and is currently co-host of the morning programme, JAMAICA SPEAKS, on HOT 102 FM.

He is married to Ingrid, President and CEO of Excel Insurance Brokers, of which he is Chairman. His two children, Tarik and Kinshasa, have Masters Degrees in human resource development. Professor Munroe is also the son of the former Director of Public Prosecutions, Dr. Huntley Munroe, Q.C and his late wife Muriel.